How did fair use get into the Korean Copyright Act?

As I explained in my previous blog post, the open-ended fair use clause in the Korean Copyright Act (“KCA”) was introduced in 2011 in the course of implementing the Korea-US FTA (“KORUS”). Yet, this does not mean that KORUS mandates legislation of fair use. Instead, KORUS restricts the scope of fair use. Footnote 11 of KORUS §18.4:1 mentions fair use, but it’s purpose is to make clear that any limitation or exception to the reproduction right to temporary storage is restricted to the controversial three-step test, and even when Korea or the US introduces or maintains fair use, the three-step test prevails.

Therefore, it is fair to say that the fair use clause of KORUS is a sort of by-product produced in a way that Korean government blinds dark sides of the overly expansive KORUS protection of copyright in temporary storage.

Obligations on the temporary storage was highly controversial during the negotiation of KORUS. The Korean negotiators strongly opposed the US proposal for the temporary storage and the disagreement was not solved until the final official round of talk (March 2007). The Ministry of Culture, which co-chaired, along with the Trade Ministry, the Korean IP negotiation division, was very stubborn in the opposition. When the 1st round of talk ended in June 2006, the Ministry of Culture decided not to accept the US proposal as they viewed that the temporary storage clause would “weaken the promotion of (fair) use of copyrighted works and undermine access to information”. Further, the Trade Ministry reported to the National Assembly of the outcome of the 2nd round negotiation (July 2006) that the Korean negotiators opposed the introduction of temporary storage because the problem of temporary storage could be indirectly addressed by in combination of the permanent reproduction right, the right to communication to the public and the protection of technological protection measures. However, the Trade Minister, having controlled the whole process of Korean negotiation, changed its position later and urged the copyright officials to accept the US proposal on the temporary  storage. A negotiators’ interim document revealed that the copyright officials asked their Minister to meet in person with and persuade the Trade Minister to stop pushing them on the issue. For the purpose of preparing defensive strategies, the Minister of Culture and the National Copyright Commission held a consultation meeting with copyright experts, industries and activists, to which I was invited, ended up with failure.

The negotiation history of KORUS supports my observation on how fair use got into the law. I obtained negotiation documents of KORUS IPR Chapter after three-years long litigation against the Korean Trade Minister.

A package deal, which was very likely to be made in March 2007 after the official round of KORUS negotiation ended, contains fair use footnote:

Korea concedes – Temporary Copies : accept the temporary copies concept with an exception including a reference on “fair use” (XX.4.1) 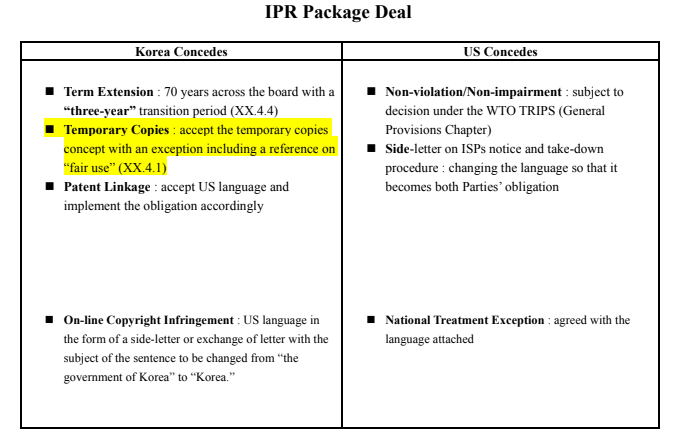 Hyun-cheol Kim who was a KORUS negotiator and a chief researcher of the Korea Copyright Commission also said, when he prepared for a copyright act amending bill to implement KORUS in 2007, that the fair use footnote was introduced due to the concerns of side effects of reinforcing the reproduction right. (p. 73 of this document). In the meantime, the latest treatise on copyright and FTAs, which was edited and published in 2019 by the Ministry of Culture does not mention the history, either (see https://www.mcst.go.kr/kor/s_policy/dept/deptView.jsp?pSeq=1283&pDataCD=0417000000&pType=04).